Adoptees searching for relatives in the New York boroughs have a new (free!) resource to verify and supplement the (fee-based!) Ancestry.com, New York City Marriage Indexes. The marriage index images for all five New York City boroughs from 1930-1972 are now online, an addition to the 1908-1929 collection that was posted last year. This is an index that shows the bride and groom names, the date of the filing for marriage and the certificate number. Read the caveat — some records are missing — from Reclaim The Records, a not-for-profit group that is using the states’ public records acts to put hidden public data online.

How To Search the Marriage Index

This is a non-searchable index organized by the first two letters of the groom’s or bride’s last name, filed by month. Select the year; then go to the month of the marriage. If you don’t know that, be sure to look through the entire reel of the year to find all of the names starting with the first two letters of the last name. If the last name started with “AL” and the marriage was sometime in January through March, those are lumped together in one section. After going through all the last names starting with “A” in the January-March section, the “A” names for records filed April-June begin. For those public record researchers who were around before computers, this will be familiar to you as the bound index books of recorded documents, court filings and birth and marriage records.

The married partners are not shown together. So, if you identified the groom, the bride would appear under her name in that alphabetical location on the reel. The only reference linking them is the marriage certificate number. Until this is digitized, matching the parties will take a lot of time if you don’t know both names. The records are organized the same for both bride and groom. Marriage filings from 1950-1966 can be ordered at the New York City Clerk’s Office or by mail. Older records can be retrieved at the New York City Municipal Archives. Marriages since 1967 are not a public record.

Select the reel you want to view. First, put your cursor at the bottom of the screen where it has the text, “NYC Marriage Index.” Then scroll to read a detailed description of the index and where to retrieve the full records. 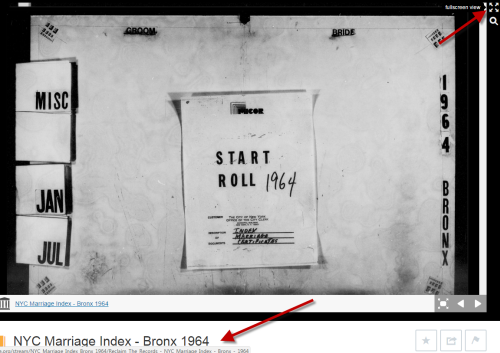 Next, select “fullscreen” mode and then magnify the page. You can download this as a PDF, too.

Additionally, Reclaim The Records has a searchable index to “every marriage license filed at the New York City Clerk’s Office from 1950-1995. It is NOT a complete list of every couple who ever got married in New York City. Read our Frequently Asked Questions to find help for common problems.” Make sure you do! (The New York City Clerk’s Office created the database, so the limited content is attributable to what they provided.) This index cross references the bride and groom and can be downloaded to a spreadsheet. The entries don’t have a link to the handwritten index. You’ll have to go to that separately. Check the names against the index image because there may be spelling differences. Also, the index image adds the month and day.

– It costs to search and a free one (for dates 1950-1995) is available.
– The record set is not complete but there is no specific disclaimer, leading the researcher to assume that all data is incorporated.
– The content is abstracted from the database provided by the New York City Clerk’s Office.
– Digitized records are inherently prone to errors – in transcriptions of names or missing them all together. (This applies to the Reclaim The Records searchable database, as well.) The Clerk’s records left out this entry all together, which presents an intriguing message in the margin of the image.

– Some records show only a year and not a day and month.
– A middle initial may be missing from the transcription even though it’s in the handwritten index.

The Ancestry.com and Reclaim The Records searchable database are missing the same data. The Ancestry one:

– The date listed is when the couple applied for the license, not the date of the marriage, which could have been days or weeks later. (Source: ReclaimTheRecords)
– The identified borough is where they applied for the license, not necessarily where the ceremony occurred. (Source: ReclaimTheRecords)
– The term “certificate” is misapplied. These records are the licenses kept by the City Clerk’s Office.

So, there are advantages to the original handwritten marriage index:

– It’s free to review and download.
– The researcher can see all recorded marriage records in their original form.
– Complete names including middle initials.
– The month, day and year the event was recorded.
– The index images can be enlarged to better interpret the notations.